Currently there are twenty eight children (14 boys & 14 girls) studying at Saplings Preschool. The children have returned to attending  school from Monday-Friday from 8am-12pm and spend their time learning letters, numbers, drawing and learning to read and write in Tamil. They are also taught English.

To celebrate ‘World Children’s Day’ in Sri Lanka, the preschoolers were taken to a children’s amusement park in Panadura and enjoyed a fun-filled day going on rides and having  healthy snacks. 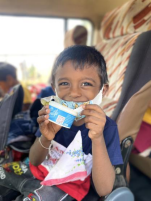 Poor nutrition remains a problem amongst these preschool children so a nutritional snack is being given to them  two to three times a week at school. Last week, the children received milk, yoghurt and orange juice on three separate days, which they enjoyed very much.

SERVE has also co-ordinated and obtained permission to organise mobile eye-screening camps in two public schools educating children from low income households. Opticians working at the community eye care centre, supported by SERVE, conducted the examinations and will provide glasses and medication as appropriate. The initial screening was done for 257 students, of which sixty five students were referred for additional eye care and in need of treatment to correct their eyesight.

With regards to providing the six interest-free loans to be paid back within ten months (Feb. – Nov. 2022) to mothers of school-age children, repayments have already been used from the fifth month to fund four more loans.

So far the six businesses are doing well – carpentry (2), sewing (2), packing lunches (1), buying and selling clothes (1). Profits are used for the benefit of each family and their children’s education.

However, two businesses – food production and running a small mobile grocery shop have made low profits, and are thus repaying in smaller instalments. One sewing business had to reduce production while the mother was unwell. Another business – the mobile grocery shop, reported difficulties due to the high cost of items and reduced sales, following the collapse of  the Sri Lankan economy.